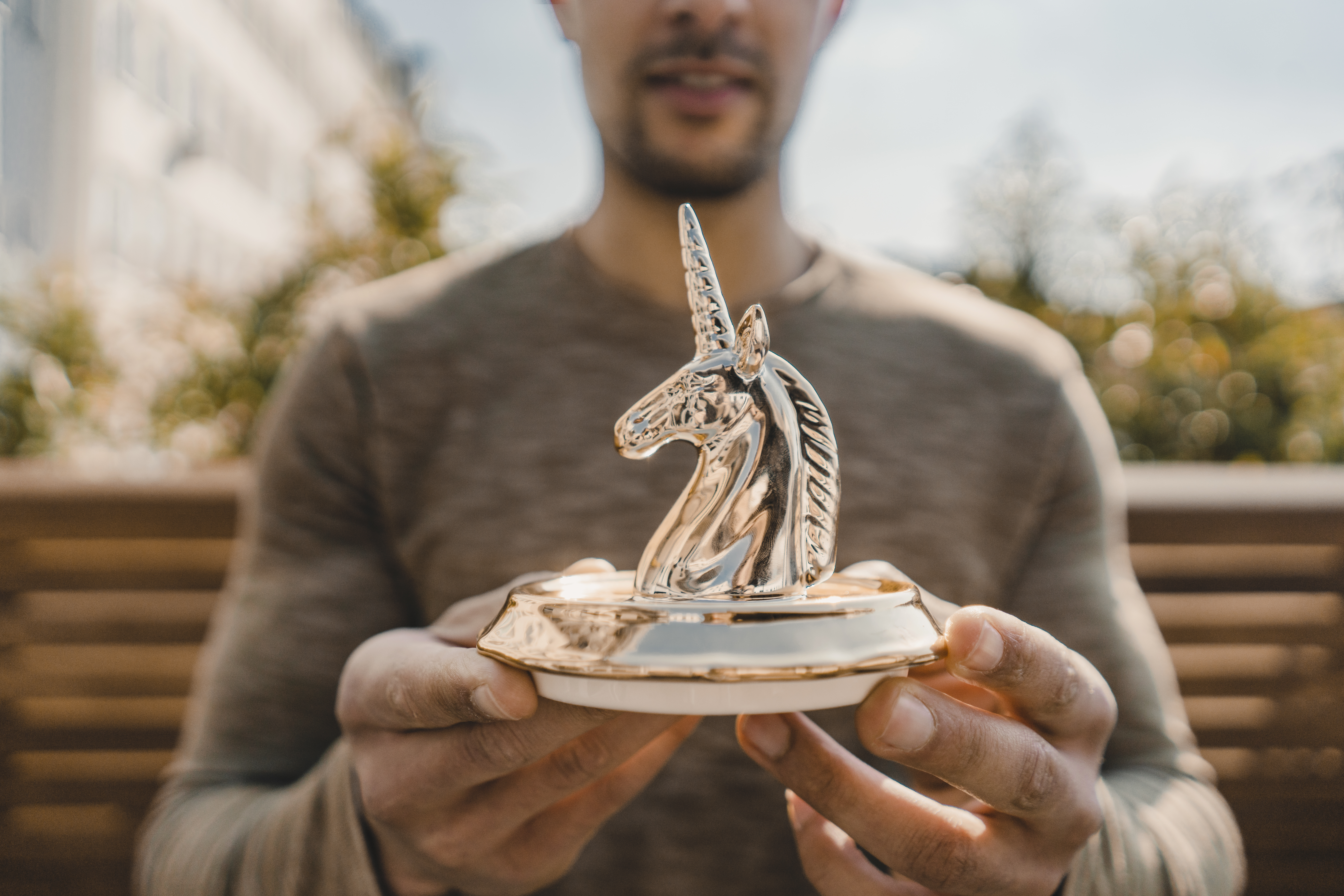 What is a Unicorn Company?

The Definition of a Unicorn Company

A unicorn company is a privately-owned startup business with a valuation that surpasses $1 billion. Aileen Lee, founder of Cowboy Ventures, coined the term in “Welcome To The Unicorn Club.” TechCrunch published her article in November 2013. Since then, “unicorn” has become a popular way of describing the rare percentage of startup companies that experience billion-dollar success in a short period of time.

Many unicorns have exceeded their $1 billion requirements and branched out into new subsects that have different terminology. A decacorn is a unicorn company with a valuation of $10 billion. This includes companies like Instacart, SpaceX, and Stripe. The word hectocorn is used to describe a startup with a net worth of over $100 billion. Currently, according to CBInsights‘ list of unicorns, Bytedance, creator of the app TikTok, is the only hectocorn in existence.

How Rare are Unicorns?

As their namesake suggests, unicorn companies aren’t a commonality. The truth is, most startups don’t succeed. According to a report published by Startup Genome, 9 out of every 10 fail. Even when venture-backed, 75 percent of these companies don’t provide a return on investment.

While this information might seem discouraging, the good news for entrepreneurs is that the number of unicorns is on a massive upswing. In 2013, when Lee published the article, there were only 39 unicorn startups on her list. According to Crunchbase News, as of 2020, over 600 companies in the world achieved unicorn status. The site also states that once every three days, a new startup joins the elusive club.

Yet, as Venture capitalists (VCs) become more involved with startup companies, the price of becoming a unicorn is quickly rising. In the future, this could decrease the number of unicorn startups. An article from Pitchbook explains, “The median deal size for a unicorn has remained steady in the last decade, gradually shifting from $135 million in 2014 to $175 million in 2018. However, the average shot to an all-time high of $392.4 million in 2018, up from 2017’s $242.6 million.”

The Relationship Between Unicorns and Venture Capitalists

VC’s and startups work hand-in-hand in reaching unicorn status. Securing funding plays an important role in a company’s worth. For example, valuations elevate when entrepreneurs secure higher series of funding. Firms such as Tiger Global Management, Sequoia Capital, and SoftBank Group know that the right deals equal big payouts. They’ve seen tremendous success by supporting startups like Airbnb, Uber, Robinhood, and Bytedance. The Q3 PitchBook-NVCA Venture Monitor report shows that, as of 2020, startups most interesting to VCs are in the telemedicine, education technology, and financial technology (fintech) industries.

Yet, most successful partnerships between VCs and startup founders extend far beyond funding. With the dismal startup failure rate, it’s important VCs provide young companies with the mentorship and direction they need. Venture capitalist Karan Mehandru tells Forbes, “Slowly but surely, more VCs are realizing that they need to offer more than just money. They also need to provide value—and values—to account for the most important resource of all: human capital.” If VCs want to get a return on their investment, it’s necessary entrepreneurs learn how to successfully run their businesses.

Why is ByteDance the Apple of VCs Eyes?

One of the most successful relationships between VCs and a private business owner is that of ByteDance. Needless to say, the company has become the darling of firms like SoftBank, General Atlantic, KKR & Co, and Sequoia Capital. Zhang Yiming, a former Microsoft employee, started the world’s only hectocorn in 2012. The business launched several popular apps, including Helo, Vigo Video, BaBe, and Huoshan. The company is most famously known for Douyin and its international counterpart, TikTok. Additionally, the business’s first product, Toutiao, is now one of the most popular Chinese news aggregators. As of 2020, the company is currently valued at $140 billion. With over 2 billion downloads, TikTok alone is worth $50 billion. In 2020, it took the top spot as Apple’s most downloaded app. But, what’s so special about this company? Why is it so valuable and well-funded?

First, Yiming developed technology that solved a big problem for potential users. In 2015, Yiming told Nankai University students he got the idea for his multi-billion dollar startup when riding the subway in Beijing. He states: “Back in 2011, I noticed that fewer and fewer people were reading newspapers on subways. The sales of smartphones in China also experienced explosive growth in 2011. I thought smartphones would replace newspapers to become the most important medium of information distribution.” By noticing a cultural shift, Yiming created high-tech apps that make the experience of viewing content more convenient and personalized.

2. Its Technology is On Par with the Best in the Game

In the age of information, people want to be entertained without having to dig for the content they want to see. The company uses algorithms to track users’ interests and recommend videos and news that keeps each person engaged. This technology is similar to another of the world’s former top unicorns: Facebook. Given the technological parallels between the two companies, it’s no wonder VCs have treated ByteDance like it is the next Facebook.

Another reason ByteDance has seen so much success with their TikTok app is because of its younger, tech-savvy target audience. Reuters reports that 60 percent of users are 16 to 24, meaning they’ve grown up with technology as a common means for connecting and engaging with friends and followers. The app wisely appeals to Gen Z by promoting challenges and trends for them to participate in and share online. This means it hooks users by being engaging on two different fronts: content consumption and content creation.

4. The Conditions for Success Were Right

One of the biggest reasons ByteDance has been able to acquire billions in funding is due to Alibaba’s $25 billion IPO in 2014. This enormous valuation turned international investors toward supporting Chinese technology companies. In addition to this, Adam Lurie explains in a LinkedIn article sponsored by Pitchbook, “In 2007, MOST [China’s Ministry of Science and Technology (MOST)] launched the first of many state-owned “guidance funds” to stimulate growth and attract more capital into technology startups . . . . MOSTs investment in BAT [Baidu, Alibaba, Tencent] allowed them to accelerate growth and develop their pervasive platform strategies that extend into virtually all sectors of the internet . . . many of these innovations (superior algorithm and mobile experience for users, innovative commerce potential for brands) are the end product of MOSTs directives.”

In short, ByteDance is reaping the benefits of its predecessors. As a mobile one-stop-shop for entertainment and potentially e-commerce, it’s got all the makings to generate more revenue than companies like Facebook and Twitter. For this reason, those who have invested in the business expect a big payday when they decide to exit.

As mentioned above, unicorns are currently multiplying at a faster pace than ever before. During the first week of 2021, TechCrunch reported that five new unicorns appeared. But, why are unicorns becoming less rare? Using research published by the Kauffman Foundation, an article for NPR explains, “The number of unicorns has been rising in part because of an influx of both startups and investors. After the recession caused a sharp decline in startups and other new businesses, a slew of all kinds of new businesses entered the market . . . and many of them were startups.” As investors warmed up to the idea of finding the next greatest startup, more unicorns naturally popped up. It’s encouraging news for those interested in starting a business.